by DLK
I recently updated to a new PC running Windows 10 Pro edition 20H2 with Intel Core i7, 16GB RAM, 512GB SSD, 1TB HDD and have downloaded and installed the latest FBackup version 9.1.369, but it does not successfully start up. When I run FBackup, it shows the FBackup banner screen with "Refreshing drives information" and hangs at that point. 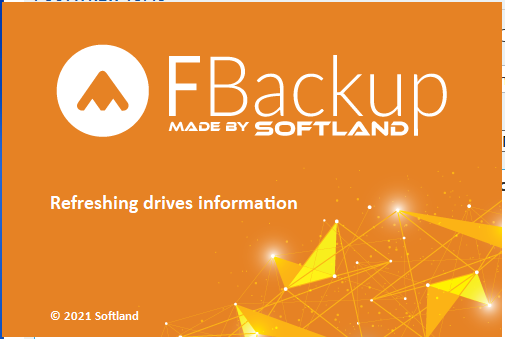 The FBackup icon on the taskbar shows "Starting (Not Responding)" and if I click on the the banner screen, it reports "FBackup is not responding" and when I click "Close the program", sometimes it closes and other times it does not. 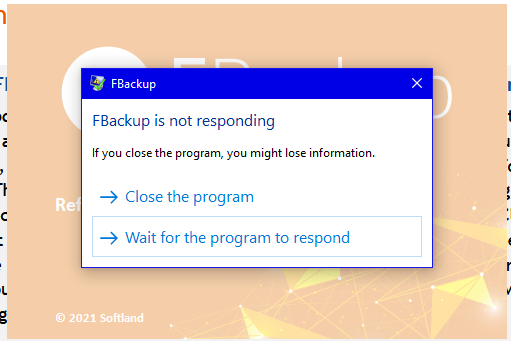 When it does not close, I then attempt to end the FBackup.exe task in Windows Task Manager. That sometimes works and other times reports "The operation could not be completed. Access is denied." In that case, the only way to exit the hung FBackup program is to reset the PC!

Has anyone else seen this problem? I have been running FBackup for many years on older PC's and would like to use it on my new PC as well.

Please close FBackup and rename this folder:
"C:\Users\<user name>\AppData\Roaming\Softland\FBackup 9\"
Try again to run FBackup. It will start with no jobs, can you create a new backup job and run it?
Do you still have the problem?

by DLK
Hi,
I did as you suggested and the problem is still there - it just hangs so I cannot create a new backup job or anything else.

by DLK
Hi,
Here's some further followup testing of what was suggested: (I waited much longer for results)

1. Is there any antivirus which blocks FBackup? Does it starts so slow even without backup jobs?
2. Please send us the backup log file for that job in order to see what the problem is. Send it to info[at]fbackup[dot]com
3. Please put the bservice.exe process from the FBackup installation folder in the exceptions list of the antivirus/firewall.

I found the problem! On my system, I have a USB-attached 3.5" floppy drive. If there is no floppy disk inserted in the drive when starting FBackup, the "Refreshing drives information" process appears to attempt to access the floppy drive and waits until a floppy disk is inserted or some timeout occurs.

The FBackup log file does not appear to be generated until the timeout (about 4 to 6 minutes) occurs, so I see nothing in the log file until then. I have sent the log file as requested.

Thanks.
All times are UTC
Page 1 of 1